Taking to his Twitter page, the media personality called out church leaders who are yet to lend their voices to the on-going protest.

Controversial OAP and Free the Sheepie Leader, Daddy Freeze has lashed out at religious leaders who are mute about the ongoing #EndSARS protest currently happening in the country.

Taking to his Twitter page, the media personality acknowledged others who have spoken out and pleaded with the rest to publicly come out and stand for the people like late American Christian minister and activist, Martin Luther King Jr, did for his own people.

”The silence from the Churches/GOs regarding #EndSARS is so loud! Except for a few that spoke earlier, everyone else in church leadership is so conspicuously silent? Please, I plead with you, Stand with the people like Martin Luther King did! He was a reverend! ~FRZ #SARSMUSTEND” 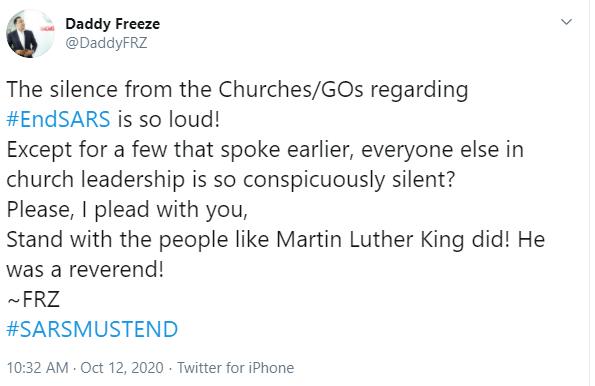